Bardia National Park and Chitwan National Parks are ideal locations for sighting varieties of wildlife including the one-horned rhino. 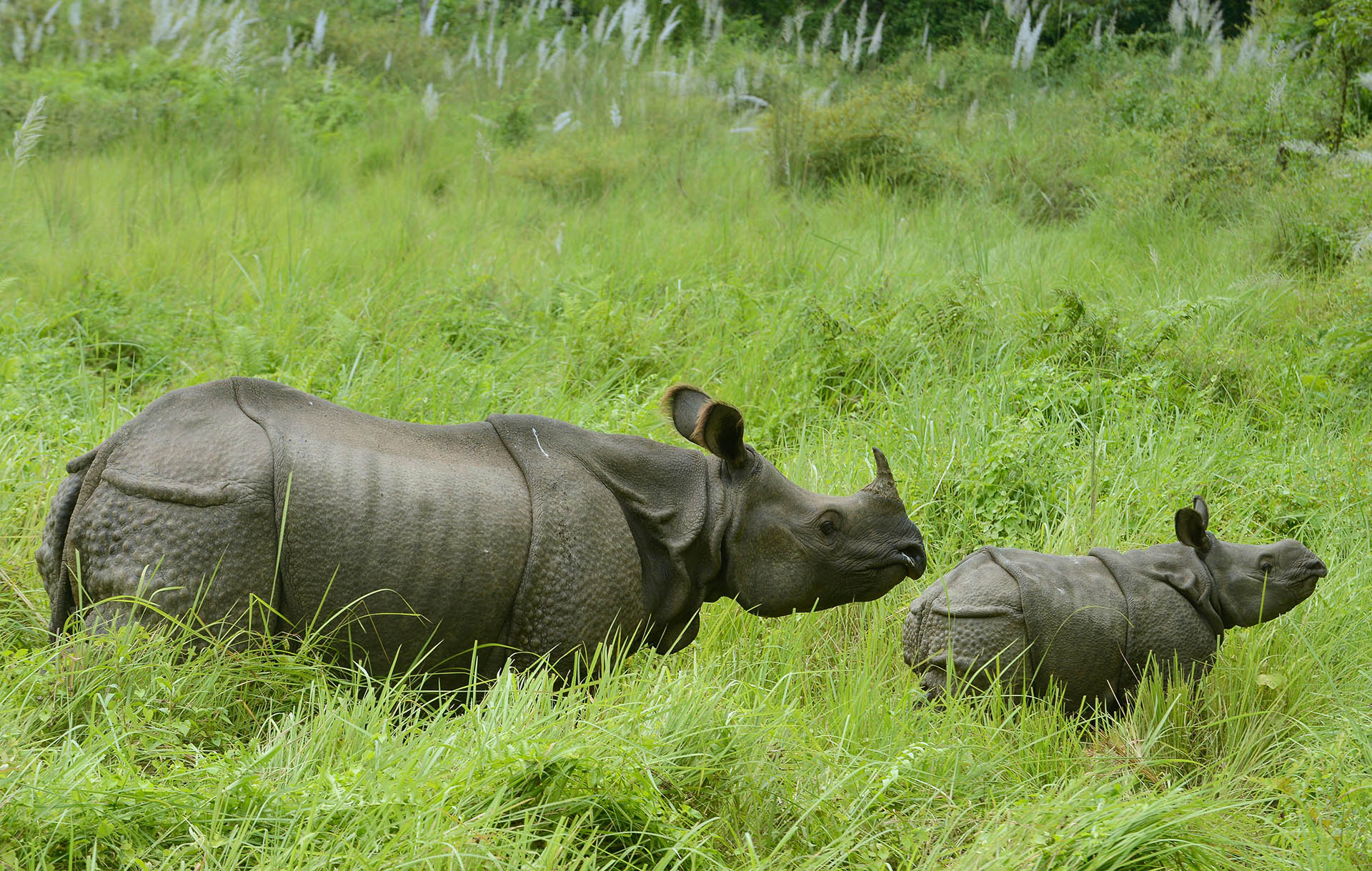 One-Horned Rhino Tour in Nepal is one of the best wildlife activities for nature enthusiasts. Bardia and Chitwan National Parks are ideal locations for sighting varieties of wildlife including the one-horned rhino. Chitwan National Park is a place where you can unwind yourself and also grow closer to nature. In addition, the national park provides perfect access to encounter different species of flora and fauna. Because of this, around 200,000 tourists visit Chitwan every year.

One-Horned Rhino tour in Nepal is possible in Bardia (BNP) and Chitwan National Parks (CNP). CNP is located in the inner lowland plains of south-central Nepal. It is connected with Parsa, Nawalpur, Chitwan, and Makwanpur districts. The park lies in an altitude range of 100 m to 815 m in the Sivalik Hills.

The park is also home to 68 species of mammals including the Royal Bengal Tiger and greater one-horned rhinos. Similarly, it housed 55 species of amphibians and reptiles. Likewise, around 546 species of resident and migratory birds are found in the forests, riversides, and lakesides around the park.

One-Horned Rhino Tour in Chitwan National Park trip itineraries is customizable; according to your choice & the number of days you want to stay. Simply, you can also modify your daily activities.

Encounter everything that you've read and watched on the internet, the tranquil beauty of Nepal, and the warm hospitality of Nepalese. Flying through the beautiful mountain view and thickly wooded hills and plains, you will land in the capital of the country. At the airport, you will meet one of our team members who will escort you to the luxurious hotel in Thamel.

Once checked in, you can walk around in Thamel, Kathmandu's tourist hub. Here you can also find restaurants with varieties of cuisine to dine.

Fly to Bharatpur and Drive to Megauli/ Sauraha

Fly (25 minutes) from Kathmandu to Bharatpur. Arrive at Megauli or Sauraha which is approx. 32 km from the main highway in Bharatpur. Upon arrival, a welcome drink is served and there will be a short briefing on the program and our facilities, and rooms will be assigned.

In the afternoon floating downstream the Rapti River, towards the western boundary of the park formed by Himalayan Narayani, a boat safari will be arranged for the evening time offering our unique sundowner experience at the confluence point.

Slide presentation, one of our jungle experts will introduce background data and the history of the Chitwan National Park as well as some other topics relating to wildlife. Your Questions are most welcome. Evening dinner at the resort.

Jeep Safari with Breakfast in the jungle: Duration – Approx 4-5 Hours: Proceed for the Jeep Safari crossing the Rapti River by Patela Boat to start with from Bhimle army check post. There are two choices of routes available, which our naturalists pick upon their experience with current sightings and animal movement.

Breakfast will be served in between the safari in a scenic and safe spot chosen by the Naturalist. After the Safari leisure time to relax by the pool or use Spa Facilities till lunchtime.

Walking safari Inside the National Park:
After Lunch proceeds towards the Rapti River just in front of our resort in a Boat put-in point and crosses the river on a patela boat. After crossing the river start a Nature Walk inside the Chitwan National park to explore the different oxbow lakes like (Devi Tal, Munda Tal, Lamo Tal, and Kamal Tal) to view the Marsh Mugger and different mammals, aquatic and other bird species. Duration – Approx -3-4 Hours

Boat Safari (Morning): Wake-up call followed by Tea/Coffee. Can experience the morning boat safari for about 1 hour floating downstream the Rapti River, towards the western boundary of the park formed by Himalayan Narayani.

Breakfast at the resort or by the River (as per the present season/ condition) back to the lodge and relax by the pool for the rest of the late afternoon or we can go for a jeep safari to the different habitats of one-horned rhino and others wild animals with pack lunch.

Optional Short Village Walk: A visit around the village on foot to experience the daily life of the village people in the company of an experienced communicator to enhance knowledge of the life of the Tharu people, Duration – approx. -2 Hours.

Dinner at the dining hall or by the pool.

Fly back to Kathmandu

Drive to Bharatpur Airport and fly back to Kathmandu.

Once you reach Kathmandu, we will check you in the same hotel in Thamel. Self-exploring the narrow streets of this tourist hub for souvenir shopping and drinks is a good way to spend the rest of your day. Later in the evening, we will take you out for a farewell dinner and listen to your wildlife tour experiences.

We will drop you at the airport according to your flight schedule. Tiger Encounter hopes to take you to another exciting wildlife safari in Nepal soon.

Note: During monsoons (End of June / July to August) Jeep safaris are not conducted by park authorities. Alternate activities are provided during this period.

Description of the Location

The first national park of Nepal, Chitwan National Park covers an area of 952.63 sq km and covers the districts of Nawalpur, Parsa, Chitwan, and Makwanpur. Its altitude ranges from 100m to 815m. Narayani-Rapti River is a natural boundary in the north and west of the park whereas Parsa Wildlife reserve lies in the east part of the park and India’s Valmiki National Park is in the South.

To reach Chitwan National Park, you can go either by Vehicle for 5 to 6 hours to the South of Kathmandu or by air to Bharatpur Airport for 25 minutes followed by half an hour drive to the national park.

Note: Evening Entertainment of Tharu Cultural dance and PowerPoint Presentation about CNP and flora and fauna by expert Naturalist will be offered from the house those staying on Jungle Plan.

Note: During monsoons (mid-June / July to October end) Jeep safaris are not conducted by park authorities. Alternate activities are provided during this period.

This is a pre-booking form for the lead traveler. We would send you the actual booking form after the confirmation

What your client say about us.

“Fantastic from beginning to end”

We went on a wildlife safari tour operated by Tiger Encounter last May 2019. It was a great experience for the whole family our kids were very excited to see animals out in the wild.

Walking along with the wild that shelters varieties of birds and animals felt amazing. Very organized and fun wildlife tour.

“Came close to the nature during the wilderness walk”

Tiger Encounter made our tiger encounter possible. On tiger tracking day two we saw the beautiful beast come out to drink it has an incredible experience. Waiting for almost two days on the blazing heat of May was really worth it!!

“Can’t believe I actually watched them be” 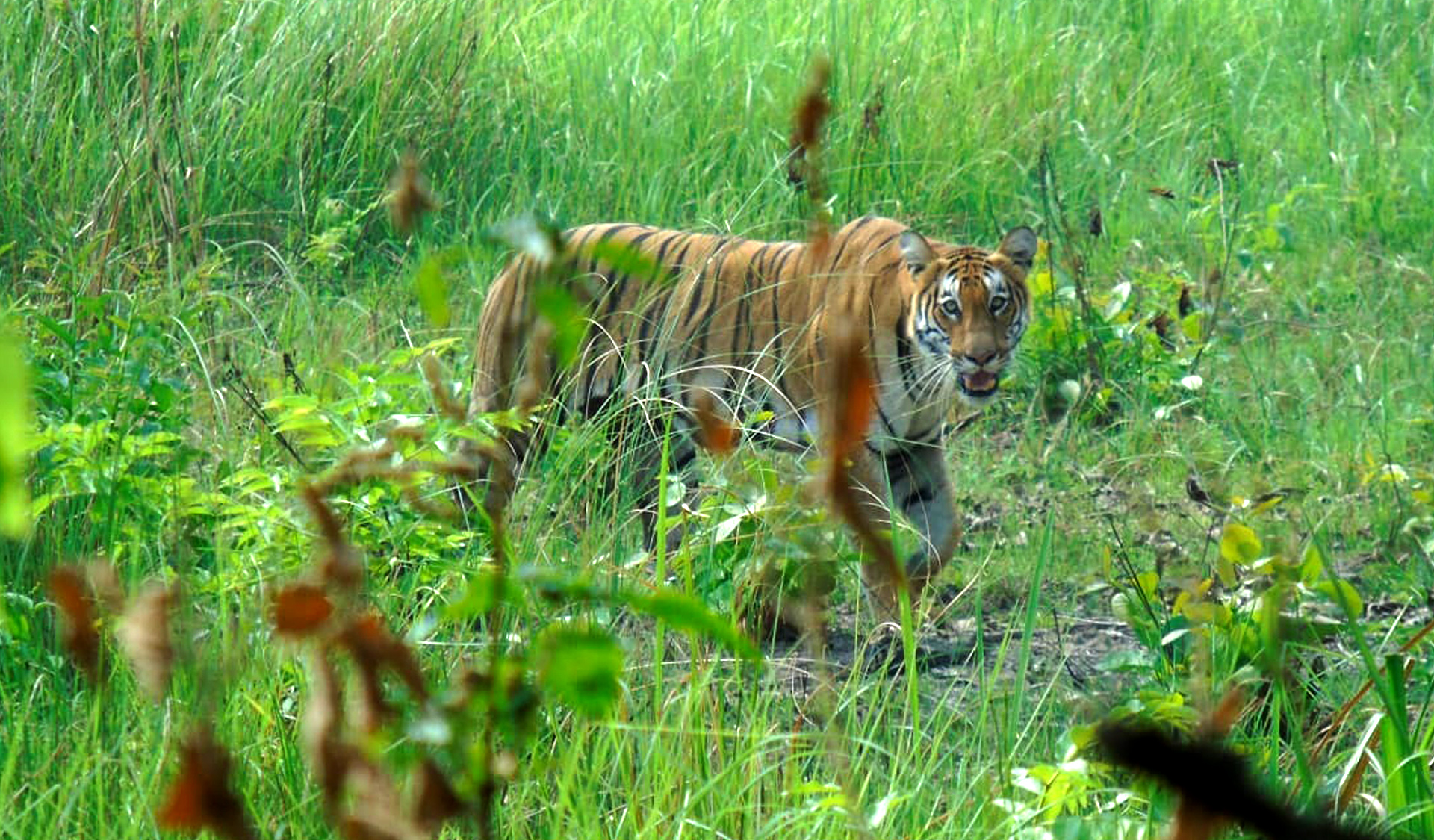 Come across the magnificent Royal Bengal Tigers, and watch them live their untamed lives. Experience this immense quest in the wilderness of the most undisturbed protected area in Nepal. 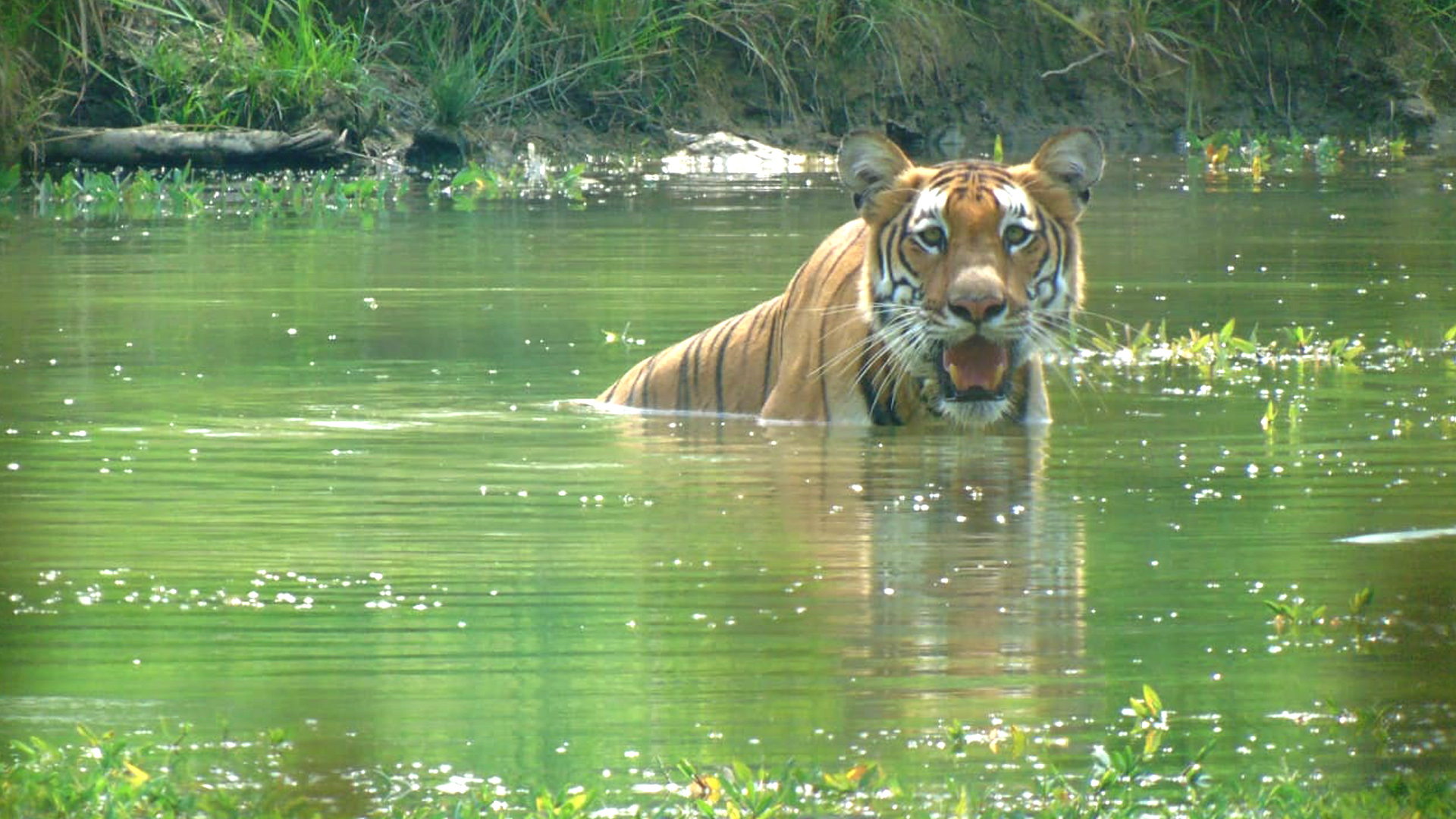 Explore the wilderness of Chitwan National Park to visit Royal Bengal Tigers, one horned rhinos and many other animals and birds in their natural residence. 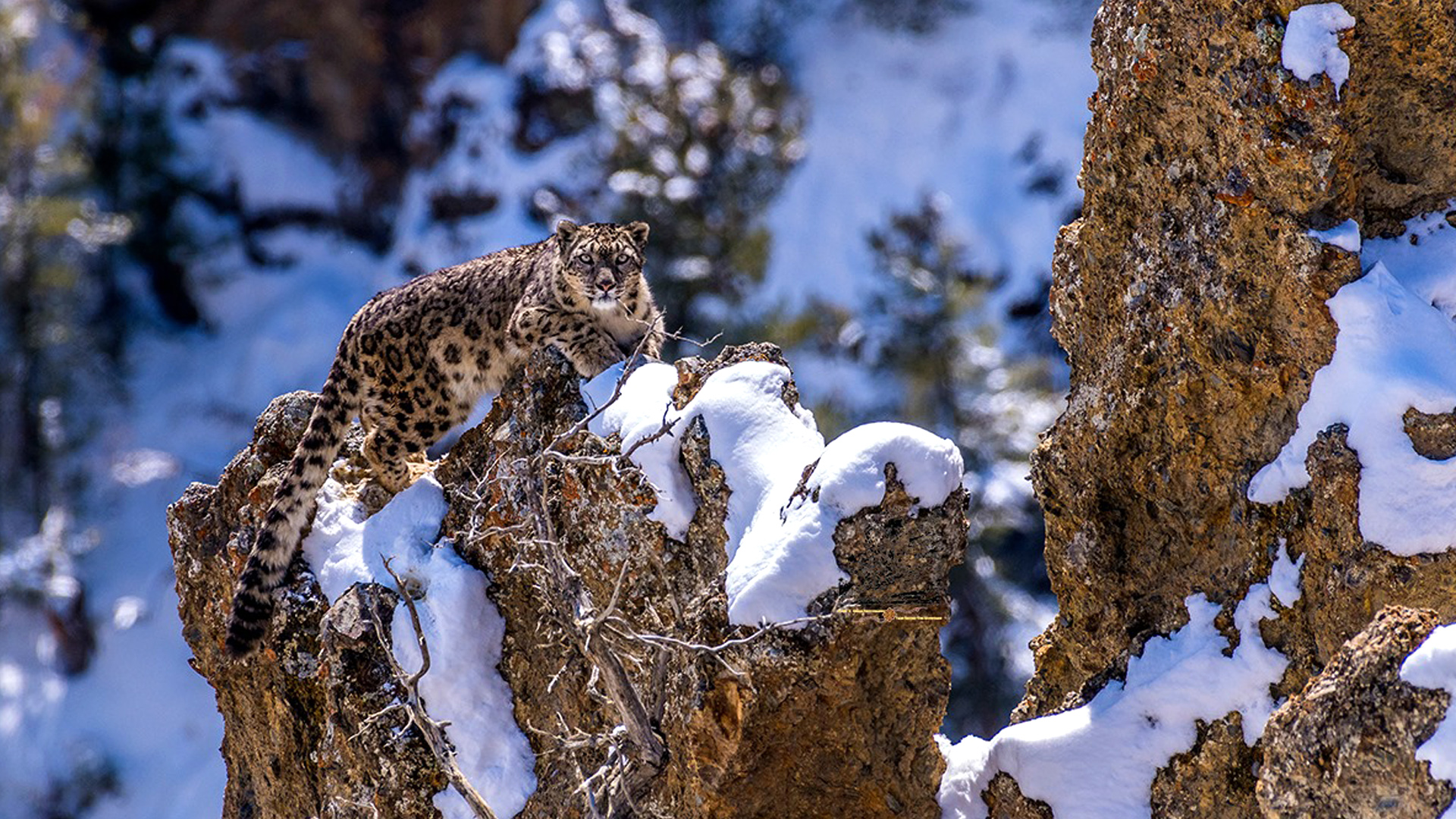 Snow leopards are found at altitudes between 9,800 and 17,000 feet in the high, rugged mountains of Central Nepal.