This dense forest was home to about 800 one-horned rhinos. Gradually the people from the mid-hills started migrating to Chitwan in search of cultivable lands. Subsequently, the area was opened for settlement and increased human activities resulted in wildlife poaching. Furthermore, after the eradication of malaria human settlement started increasing and by the end 1960s, more than 70% of the forest was cleared. While the human population was increasing in the area rhino and other wildlife kept decreasing. To conserve the wildlife of Chitwan, the borders were marked out in December 1970. The Chitwan National Park is therefore developed with an initial area of 544 sq km. 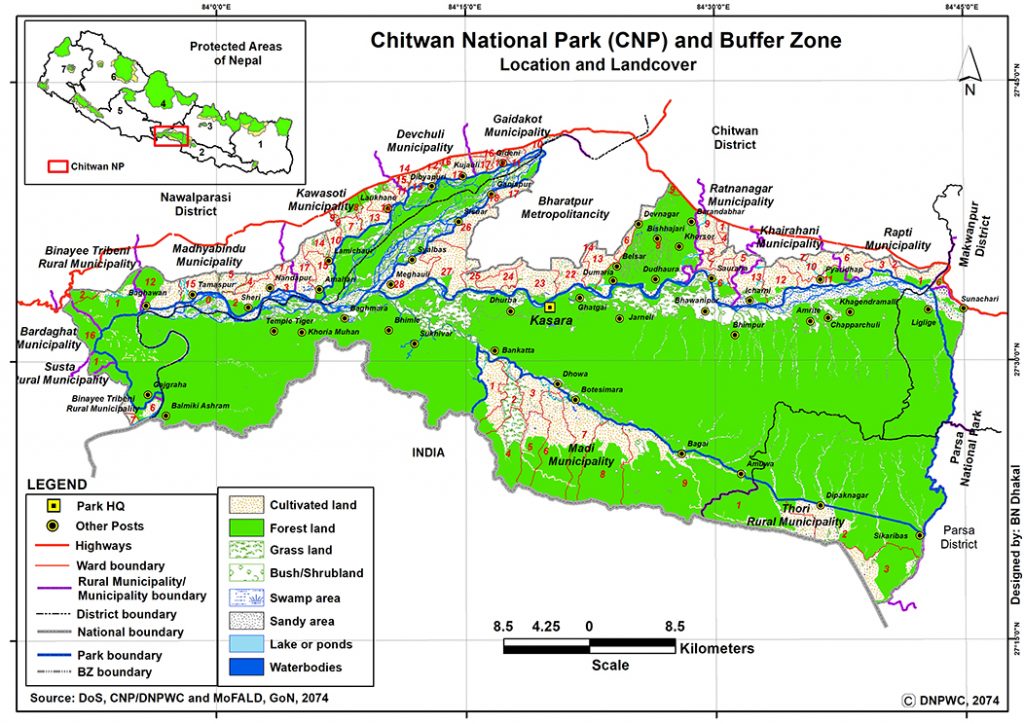 Chitwan National Park is located in the inner lowland plains of south-central Nepal. It is connected with Parsa, Nawalpur, Chitwan, and Makwanpur districts. The park lies in an altitude range of 100 m to 815 m in the Sivalik Hills. It is detached from the human settlement with the kindness of Narayani and Rapti Rivers in the north and west. Likewise, it shares borders with Parsa National Park to the east and Valmiki National park to the south.

The park lays in the subtropical climatic zone with various ranges of climatic seasons each offering a unique experience. From October to February, the temperature is average at 25°C which is a pleasant temperature. From March to June temperatures can reach as high as 43°C. The hot humid days give way to the monsoon season that typically lasts from late June until September.

Chitwan National Park is almost 170 km away from Kathmandu. It is easily accessible from most of the cities of Nepal. The recently constructed road at the landslide occurring Mugling-Naranghad section of East-west highway has made Chitwan more accessible than before.

Every morning many tourist buses leave from Kathmandu to Sauraha which is near the park entrance. Similarly, a flight to Bharatpur from Kathmandu and a 45 minute drive to Sauraha is also an option. From Pokhara and Lumbini, the protected area is within a driving distance of 4 to 5 hours.

There are 12 entrance gates to the park.

The Chitwan Valley consists of tropical and subtropical forests with Sal trees covering 80% of the area. The 12% area is covered by grasslands with more than 68 species of grasses. The elephant grass is called Saccharum Ravenna, giant cane (Arundo donax) Khagra reed (Phragmites Karka), and many species of true grass are also found here. The monsoon rains bring lush vegetation, and most trees flower in late winter. The Palash tree, known as the “flame of the forest”, and silk cotton tree have spectacular crimson flowers that can be seen from a distance.

The buffer zone with an area of 729.37 sq km is connected by four districts: Chitwan, Parsa, Makwanpur, and Nawalparari. There are eight municipalities, three Rular municipal, and one metropolitan city in these four districts. As per the yearly report of the government and park authorities around 273977 people reside in 59707 households in this area.

Besides Tharus, other ethnic groups such as Bote, Musahars, and Kumal have lived in Chitwan for hundreds of years. The Monogolid ethnic groups such as Gurungs, Rais, Tamangs, and Magars had also migrated from the highlands decades ago. Similarly Brahmins, Chettris, Newars, and the Terai Nepalese.

Canoe trip provides good opportunities to spot several species of birds. Crocodiles are a common sight during these trips. Take a gentle float down the Rapti river as the boatman steers you past flocks of birds, crocodiles, gharial, monkeys, and, if you’re lucky, large land animals drinking from the river.

Jungle walks are a great way to experience wildlife up close. Walk with an experienced nature guide as he leads you to the places where you can spot rhinos and other wild animals. They will not only show you around but inform you about the plants, animals and the history of the park. The jungle walk and canoeing trip can be done in a single trip.

Those who want to see more of the park and its wildlife jeep safari are a good option. Four to eight hours of jeep ride is available from Sauraha.

Home to 546 residents and migratory birds, Chitwan National Park is one of the best places for birding. The wooded areas, grasslands, river banks and lakes of the area feels alive with the sound of birds chirping.

As an alternative to elephant safari, some elephant-friendly activities have been initiated these days. These activities include walking with the elephants, bathing them, etc. The retired captivated elephants are treated with respect and kept unchained in these places.

The cultural dance presented by the local Tharu community is another attraction. These shows are presented at the community hall in Sauraha, they also perform in some hotels upon request.

You can watch crocodiles and marsh muggers at the breeding center.

Located in the buffer zone area of the park, this wetland covers an area of 7900 acres. It was designated as Ramsar Site in August 2003. This forested wetland provides habitat and drinking water to wildlife species.

Valmiki Ashram is named after the sage Valmiki, who is said to have written the Hindu epic Ramayan. There are a small temple and a retreat just inside the national park. It is a religious site for Hindus.

The riverside at Sauraha is the best place to be for sunrise and sunset viewing during your stay in Chitwan. Some restaurants along the river banks are keen to serve you food and drinks while you enjoy the views.

Observe local tribal life by visiting a Tharu village, where you will be welcomed and treated as valued guests. 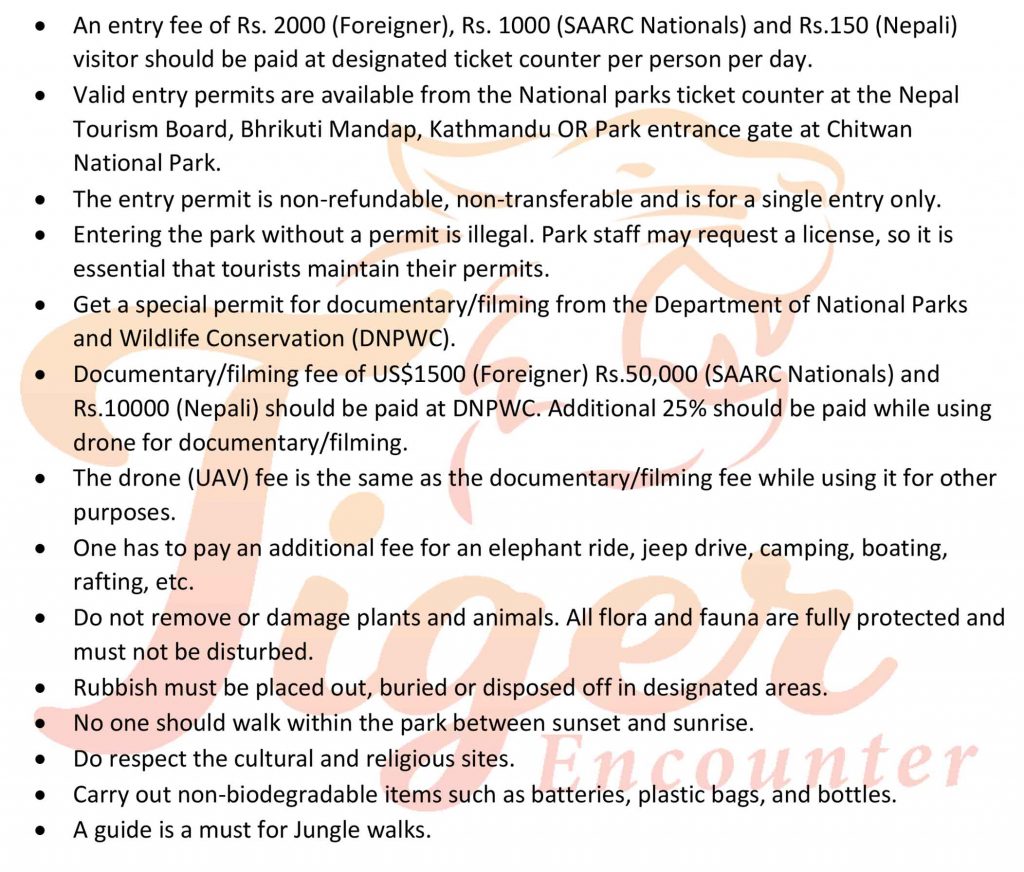 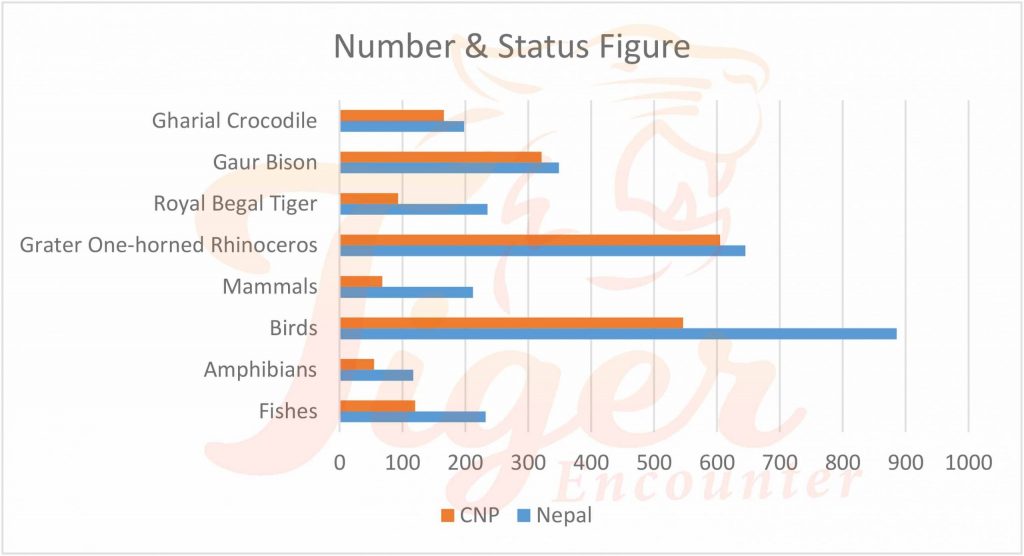