This area is developed as one of the major trekking destinations in the country. The increase in revenue earnings and the employment opportunities in this area as made great contributions to uplifting the living standards of the local community. There is high participation of the locals in the conservation activities conducted in this area. In the latest days, the development of transportation, as well as the increasing demand for hydroelectricity, has been causing some difficulties in conservation. 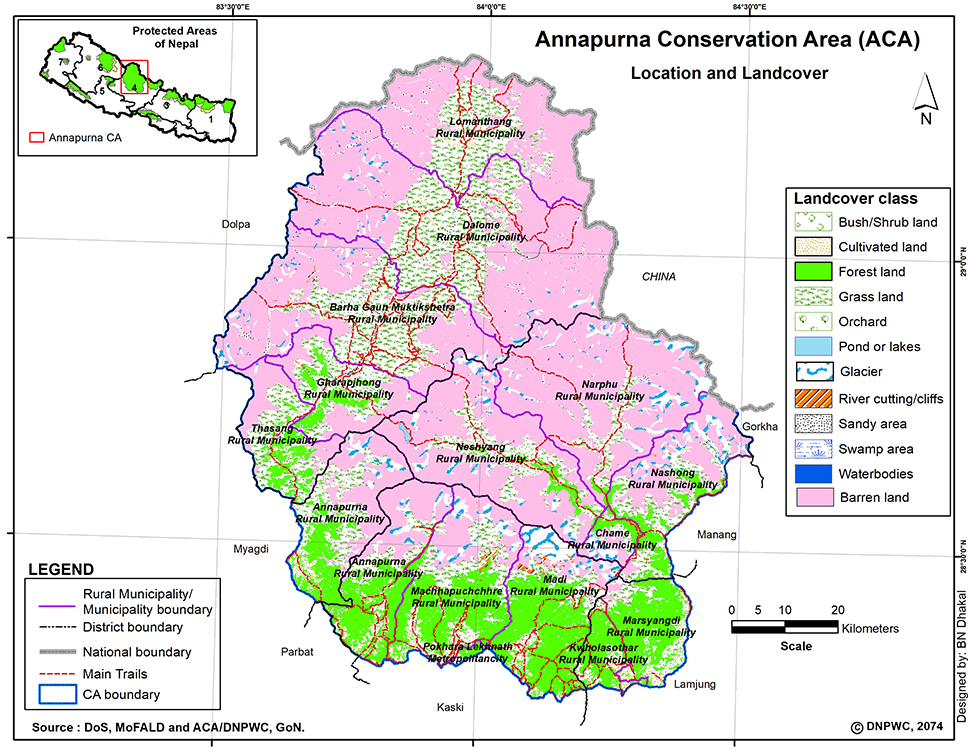 The area stretches from the subtropical lowlands and lush temperate rhododendron forest in the south to dry alpine forest in the north. The climate ranges with the altitude. With every 1000 m. a rise in altitude there is 6 degrees Celsius drop in the temperature. The average rainfall ranges from 193 mm in the trans- Himalayan region to 2987 mm at Ghandruk in the cis- Himalayan region.

Bus or taxi services are easily available from Pokhara to Jomsom in the northern part of the ACA. Alternatively, one can drive to Phedi and trek to Landruk via Dhampus.

The wildlife and vegetation are diverse in this conservation area. The altitude of the Annapurna Conservation area ranges from 1000 m – 8000m. From the subtropical sal forest to perennial snow, this area is home to 22 different forests with 1226 plant species. Among them, 55 species of plants are endemic, only found in Nepal.

Annapurna Conservation Area is a habitat to about 101 species of mammals including endangered species like snow leopard, musk deer, Tibetan argali, and Tibetan wolf. This is the only area where all 6 Himalayan Pheasants of Nepal are found.

About 1200 people of different ethnic groups reside in this area. Tourism has helped the local people in the buffer zone. The tourists that visit this area are charged with entrance fees. These fees are spent on environmental protection and community activities. Located in the western Himalayas, more tourists than the local people visit here. Gurung and Magar are the dominant ethnic groups of the south while Thakali, Manange, and Loba are dominant in the north. With 60% of the country’s total trekkers in this area, tourism has become the occupation of most of the locals. Along with agriculture and cattle rearing, the local’s lifestyle has improved with tourism.