Banke National Park established an area of 550 sq km on 12 July 2010 with a buffer zone of 343 sq km. The national park encompasses parts of the Banke, Dang, and Salyan districts of Nepal. It is the 10th National Park of Nepal. It was also recognized as a ”gift to the earth” before its declaration as National Park due to the wide range of bio-diversity.

Besides Banke National Park is also an integral part of Terai Arc Landscape (TAL) which is a suitable habitat for tigers. Conservation of the endangered Royal Bengal Tiger found in Nepal, India, Bangladesh, and Bhutan is also one of the reasons for the commencement of this National Park. 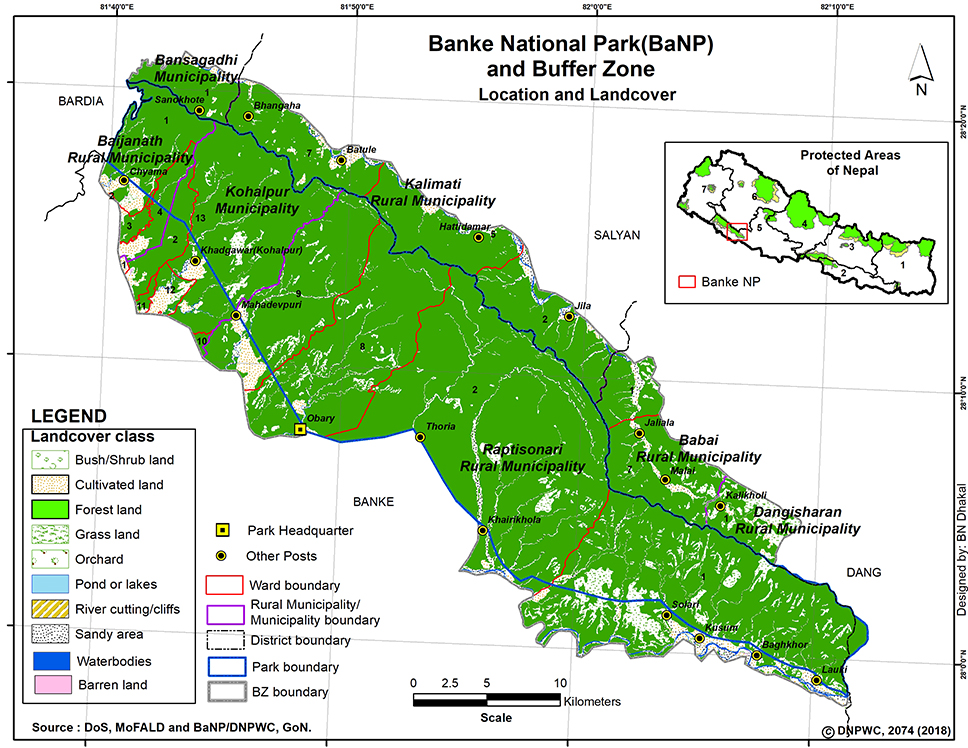 It is located in the mid-western region of Nepal. The park is connected with Bardia National Park towards the west. It adjoins the national and community forest of Nepal linking the Katerniaghat wildlife sanctuary of India to the south and the Churia range to the north.

Banke National Park has three typical seasons: winter, summer, and monsoon, each providing an experience of its own. During October – April weather is dry with warm days and pleasantly cool nights, during May – June the temperature rises at its peak, and the hot humid days invite rainy weather which lasts till September.

Regular flights and busses operate from Kathmandu to Nepaljung. The park is located about an hour of the drive west from Nepaljung. From Mahendranagar it takes about eight hours on the bus (270 km) and from Dhangadi it takes around seven hours (250 km) to reach Banke National Park’s headquarters.

Covered by sal forest, riverine forest, mixed hardwood forest, savannas, and grasslands on the foothills of Chure range, Banke National Park is home to 124 species of plants, 34 species of mammals, more than 300 varieties of birds, 58 species of fish, 24 reptiles and 7 amphibians. Among them, 5 species of mammals (pangolin, hyaena, four-horned antelope, Asian elephant, and royal Bengal tiger), two species of birds (black stork and giant hornbill), and two species of reptiles (Asiatic rock python and golden monitor lizard) residing in the park are on the list of protected wildlife. As of the survey done in 2018, there are 21 royal Bengal tigers in Banke National park.

The local population in the buffer zone

There are about 4861 households with 35712 people living in the buffer zone. Indigenous Tharu community, Brahmin, Chhetri, Magar, Tamang, Majhi, and Gurungs live here. Among which 90% depend on agriculture and the rest 10% depend on trade and labor.

Things to do in Banke National Park