Langtang National Park covers an area of 1710 sq km and is spread in Nuwakot, Rasuwa, and Sindupalchowk districts. This oldest Himalayan national park was established in the year 1976. Furthermore, the park was extended by 420 sq km of the buffer zone in 1998. It is also Nepal’s fourth protected area. It is also part of the Sacred Himalayan Landscape.

The region was affected by the earthquake in April 2015. However, most of the reconstruction has been completed and the area is safe and well facilitated for trekking. The locals of the region have been welcoming tourists with great hospitality in recent times. 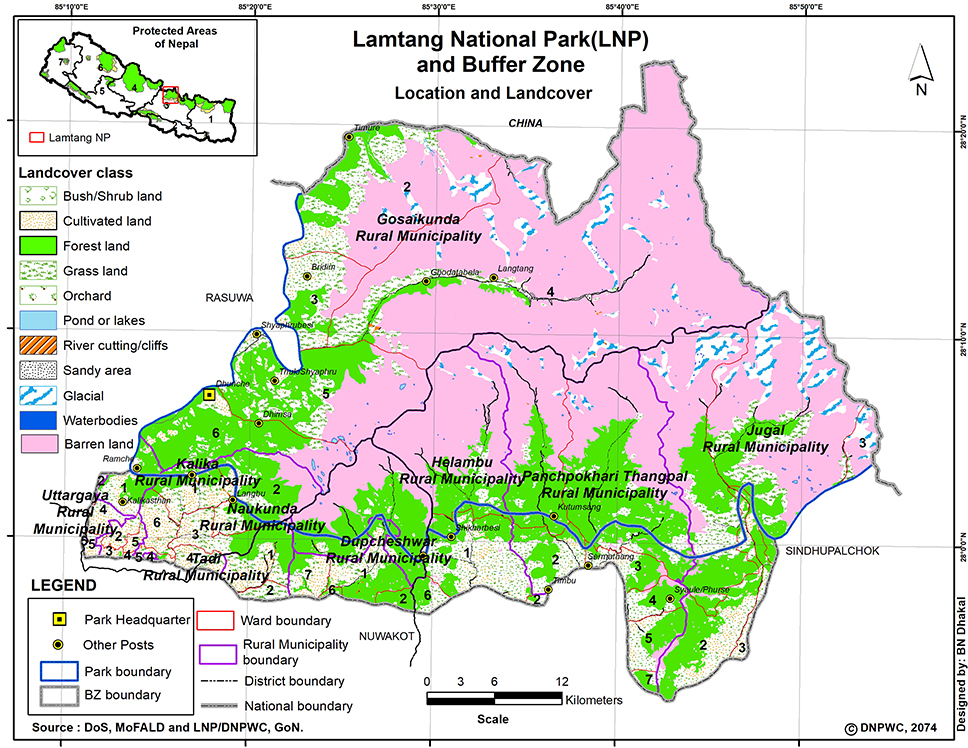 Langtang National park is located in the central Himalayan region of Nepal. The altitudinal range of the park lies is between 1,000 m to 7,245 m. It is the nearest Himalayan Park to the capital city of Kathmandu. It lies around 30 kilometers north of Kathmandu and stretches to the Tibetan border. This is linked with Qomolangma National Nature Preserve, Tibet in the North.

It is also surrounded by the Himalayas, including Langtang Lirung (7,245 m), the highest peak of the area. Chimse ridge, Jugal Himal, and Dorje Lakpa Peak (6,989 m) along with the Ganja La pass (5,122 m). Similarly, the Langtang River flows through Langtang Valley at its west end.

The temperatures in this area vary greatly due to the extreme difference in altitude. From September to November and April to May, the days are warm with cool nights. These months offer varieties of natural magnificence, with thriving scenery of valleys, rivers, and snow-capped peaks. Whereas, in winter from December to March, days are clear and mildly cold but the nights are freezing. The month of January and February, in particular, is the time when one may come across snow. From June to August the monsoon rainfall occurs. Rainfall in springs often turns to snowfall at higher altitudes.

Langtang National Park has massive ecological diversity. The park is inhabited by some rare and threatened animals like red pandas and snow leopards. The very existence of these endangered species is a sign of the park’s healthy Himalayan ecosystem. Including red panda and snow leopard, there are 46 species of mammals like Himalayan tahr, wild boar, Ghoral, grey langur monkey, Himalayan brown bear, Musk deer, etc. In addition, 70 species of butterflies and 345 species of birds such as Impeyan pheasant, ibis bill, snow partridge, crimson horned pheasant, etc hover around the park.

Likewise, there are 1043 species of vascular, 15 of them including Rhododendron are endemic species. During the spring season red, white, and pink rhododendron blossoms alongside oak, laurel, blue pine, sal, and Castanopsis indica. Similarly, an extravagant display of wildflowers can be seen during autumn.

The major activity in this park is trekking. There are three main trekking routes that cover varieties of the landscape as well as some cultural attractions. These trekking routes are popular as Langtang valley trek, Helambu trek, and Gosainkunda trek. The choice of moderate to difficult trek with a duration of 3 days to 3 weeks is available in these routes. All these routes are well facilitated for tourists. There are a number of hotels/lodges, steakhouses, and campgrounds operated locally. These facilities operate throughout the year except during peak winter.

The high-altitude Gosainkunda lake is located at an altitude of 4,300 m. During August, a lively festival at the lake attracts thousands of Hindu pilgrims. The lake was declared as a Ramsar site in 2007. Another high-altitude lake in Langtang National Park includes Parvatikunda, Bhairavkunda, and Dudhkunda.

Other less explored but worth visiting areas of the park is Ghora Tabela and the hilltop viewpoint of Kyanjin. Similarly, seeing the sights of Panch Pokhari and Ganja la 5,123 m) pass in upper Langtang Valley is a rewarding experience.

Local people and culture in a buffer zone

The inhabitants of the Langtang Valley are thought to have originated from Tibet. There are three main ethnic groups Tamangs, Bhotias with recent Tibetan origin, and Yolmo people of the Helambu region. Their culture is visible in their ornaments, dress, language, houses, and customs. They depend on livestock farming, usually sheep and yak as well as grow some hardy grains and vegetables. Their religion is the combination of the Bon religion of Tibet and Buddhism. Other people inhabiting the lower elevation range along the buffer zone area are Brahmins, Chhetris, Newars, and Gurungs.

Things to do in Langtang National park