Koshi Tappu Wildlife Reserve was established in 1976 to conserve the last remaining population of wild water buffalo, locally known as Arna. It covers an area of 175 km² and is the only wildlife reserve of Nepal. In 1987 the reserve was declared as the first Ramsar site of Nepal, to achieve conservation and sustainable use of its wetlands. Likewise, in 2004, an area of 173 km² surrounding the reserve was declared as the buffer zone. 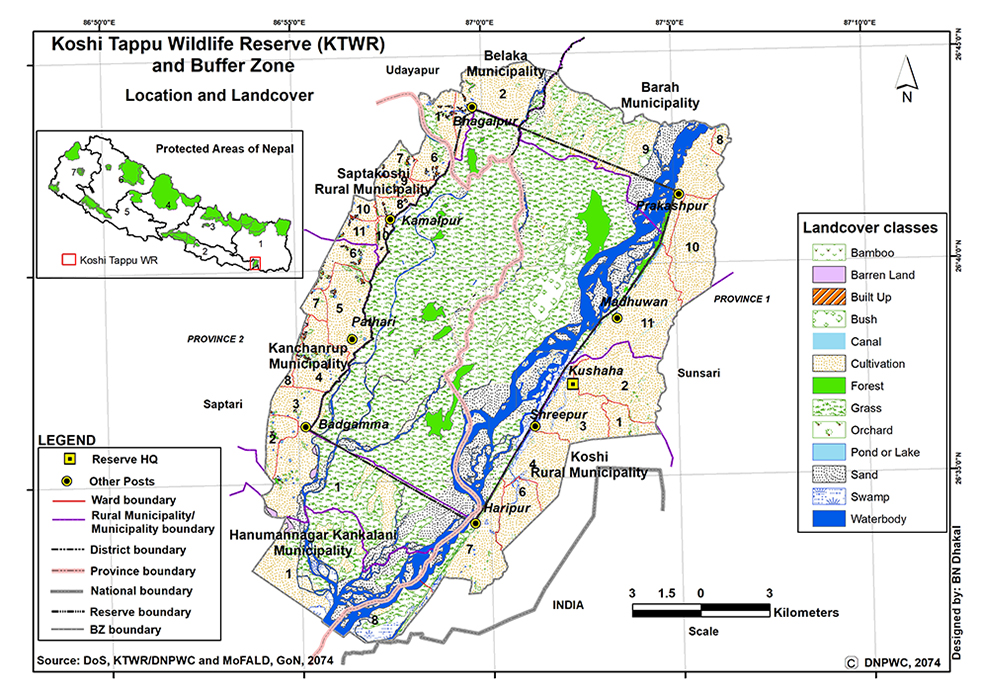 The reserve lies in the floodplain of the Sapta Koshi River incorporating Sunsari, Saptari, and Udaypur districts of eastern Terai of Nepal. It lies at an elevation of 75 m – 81 m above sea level.

The reserve experiences a tropical monsoon climate with three distinct seasons, summer (February – May), is intensely hot with minimum rainfall. The temperature can reach up to 40°C during summer. The monsoon starts in late May and lasts until September. Heavy frequent rainfall occurs during these months, especially in July. Winters (October – January) are characterized by clear skies and moderate temperatures but can get quite cold at times.

The best time to visit the reserve is from September to February when the birds migrate to move away from cold regions like Mongolia and Siberia.

The nearest airport is located at Biratnagar where the domestic airlines operate daily flights from Kathmandu. From Biratnagar, the reserve headquarter is located 57 km west by road. However, access to the reserve is affected during the monsoon seasons.

The vegetation of the reserve consists of riverine forests, submerged and floating aquatic plants as well as seasonally flooded grasslands. However, the coverage of grasslands is more than forests. Around 514 species of plants including rare and listed as threatened categories and appendices of IUCN and CITES are found in the reserve.

Likewise, a wide range of animals resides within the area. There are 31 species of mammals including the wild water buffalo, Asian elephant, spotted deer, hog deer, wild boar, golden jackals, etc. The endangered wild water buffalo only inhabit in Koshi Tappu Wildlife Reserve in Nepal. Similarly, around 527 species of resident and migratory birds can be spotted in the reserve. Out of these 527 species, 12 species are globally threatened species. Moreover, the water bodies around the reserve inhabit gharial crocodiles, river dolphins, and wide varieties of fishes.

Local Population at the Buffer zone

Around 84,423 people live in the buffer zone area spread over 5 municipalities and 1 rural municipality of Sunsari, Saptari, and Udaypur districts. Major cast living around the area include Tharu, Yadhav, Shah, Malaha, Mushar, Brahman, and Chhetri. While their economic activities are agriculture, animal husbandry, fishery, labor, and trade.

Things to do and places to visit in Parsa National Park

Bird Watching: Koshi Tappu is one of the major bird-watching sites. It is one of the 27 IBA (Important Bird and Biodiversity Area) in Nepal. During winter many winter migratory birds from China, Mongolia, and Siberia can be seen around the reserve. Boating and wild water buffalo and elephant tracking can be done in the reserve. Likewise, rafting in the Sapta Koshi River and Gangetic River Dolphins watching is also a popular activity.