Shey Phoksundo National park, established in 2040 BS (1984 AD), was announced as a national park in 2055 AD (1998 AD). This National park with an area of 3555 sq.km is the largest National Park of Nepal. It was established to preserve the unique Trans-Himalayan ecosystem with diverse flora and fauna. The headquarter of the park is located in Palam, Dolpa and the site offices are at Chhepka, Rigmo, and Kaigaun (Toijam). 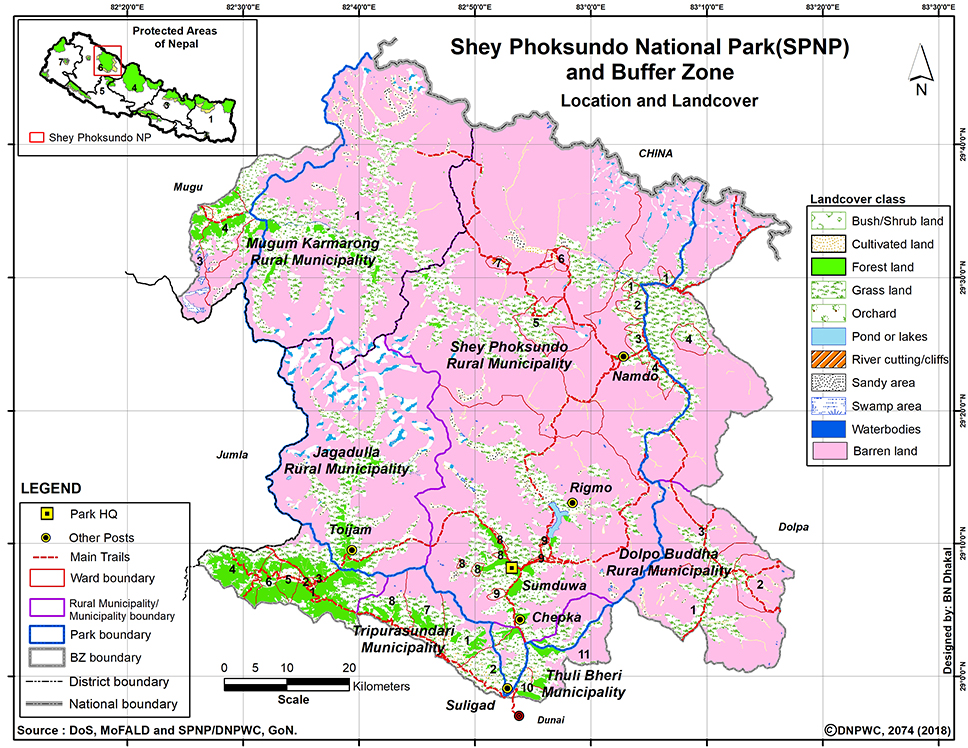 This park is located in the Trans Himalayas of the northwestern part of Nepal between the latitude and longitude of 29°21′29″N 82°50′44″E. It lies in the western development region of the country. This park is the biggest national park in the country, it is spread in two districts: Mugu and Dolpa.

The protected area lies in the elevation ranging from 2200m. at Suligadh to 6883m. at the summit of Kanjiroba. The park also provides a wide climatic range. Winters above 2500m. have frequent snowfalls and above 3000m.the temperature is below freezing. Most of the rainfall is between July and September, less than 500mm a year in the north and about 1500 mm in the southern areas.

To get to Shey Phoksundo National Park from Kathmandu, we can take road or air transportation. 317 km from Kathmandu, it takes about 4 hours to reach the region by bus. By air, we can take a flight from Kathmandu to Nepalgunj and then to Juphal airport in Dolpa. From there, half a day walk takes you to Suligad, the entrance of the park.

The park provides a home to six reptiles’ species, 32 species of butterfly (one of which is the highest flying butterfly in the world, Paralasa Nepalaica). Shey Phoksundo National Park is a habitat to some endangered species of snow leopard, grey wolf and musk deer. Other wildlife like blue sheep, Goral, Leopard, Jackal, Himalayan black bear, etc. are also found here. Also, 200 species of birds including Tibetian Partridge, Wood snipe and Crimson-eared rosefinch are found in this national park.

The serene beauty of flora is also extremely diverse in the park. Although less than five percent of the park is forested, the Trans Himalayan slope land provides both sight and home for rhododendron, caragana shrubs, juniper, white Himalayan birch, and silver fir.

Declared in 1998, the buffer zone of Shey Phoksundo National Park covers an area of 1349 sq. km. 12,256 population resides in the area with about 2374 households. Most of the population of the park practice Bon, and ancient religion with roots in Animism and Buddhism. The villages here are among the highest settlement areas on earth.

Things to do and places to visit

Shey Phoksundo national park has various gompas and religious sites, Shey gompa being one. The park encompasses Shey-Phoksundo Lake, the deepest and second-largest lake in the world. This wetland area was declared as the Ramsar site in 2007. Thasung Monastery, built about 900 years ago and Shey monastery established in the 11th century is the famous historical and religious site in the area. Moreover, this area is widely known to be a trekking destination with its beautiful flora, fauna, and attractions. Individual trekking in the area is only permitted up to Rigmo or Phosundo Lake while it is restricted in the inner-Dolpo areas. Group trekking is only allowed there.