Makalu Barun National Park was established as an eastern extension of Sagarmatha National Park in 1991. It covers an area of 1500 sq km. In addition, the buffer zone of 830 sq km was extended in 1999. The elevation range of this protected area starts from 435 m to above 8000 m. For this reason, Makalu Barun National Park is the world’s only protected area that comprises tropical forests as well as snow-capped mountains. The fifth highest mountain in the world Mt Makalu (8,463 m) also lies in this protected area. Likewise, Mera Peak (6654 m), Baruntse (7,129 m), and Chamlang (7,319 m) are some of the peaks in the Makalu Region. The national park is also a part of the Sacred Himalayan Landscape. 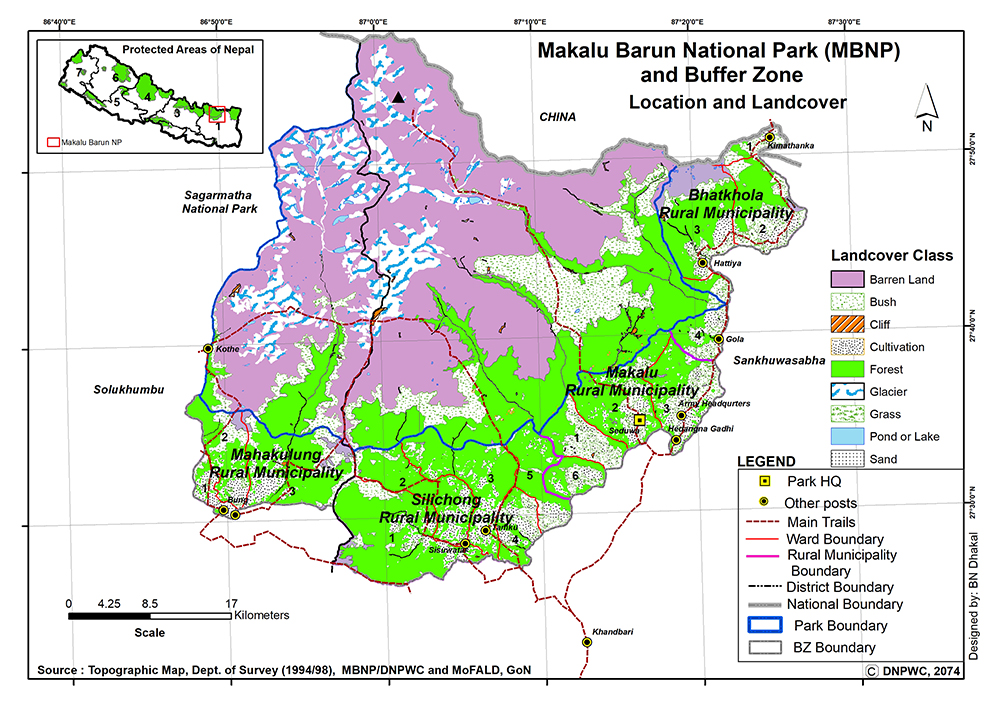 Makalu Barun National Park is located in the eastern part of Nepal. It is extended over Solukhumbu and Sankhuwasabha districts. In the north, this national park shares international borders with Qomolangma National Nature Preserve of Tibet Autonomous Region. Sagarmatha National Park is connected to the west. Similarly, the eastern part of the national park is attached to Kanchenjunga Conservation Area and Saune Ridge to the South.

The Makalu Barun National Park falls in the eastern Himalayan climatic region. Hence the monsoon starts early (June) and stays till late September. The climate in this area is generally described as monsoon type as more than 70% of rainfall occurs from June to September. Pre-monsoon rain is common during the month of April and May. The temperatures of this region vary significantly due to the altitude difference. The climate in lower elevation is moderate during winter (October to February) and hot during summer (March to May). While it remains mostly cold in the upper elevations.

Tumlingtar airport located in the Sankhuwasava district has daily flights from Kathmandu. Likewise, there are two flights a week from Biratnagar. Tumlingtar can also be reached by a four-wheeler from Dharan and Biratnagar. Similarly, Inkhu Valley Makalu Barun can be reached from Lukla/Phaplu. There are regular flights to Lukla/Phaplu from Kathmandu and Manthali Airport.

Likewise, the protected area is a habitat for an array of fauna. There are 43 species of reptiles, 315 species of butterfly, and 16 species of amphibians. The ponds, rivers, and lakes within the park inhabit 78 species of fish. In, addition 88 species of mammals and 433 species of birds have been recorded in this naturally rich and diverse protected area. The park and its surroundings are also home to endangered species like snow leopard and red panda.

The local population in the Buffer zone

Almost 38977 people reside in the 4 rural municipalities in the buffer zone area. The major ethnic group includes Rais, Sherpas, and Bhotes. There are 94 buffer zone user communities and their major occupations are agriculture, livestock farming, trade, and labor. Tourism is also becoming one of the economic activities for the people living in this area. There are several hotels, lodges, local tea shops, and campsites in the park and its buffer zone areas run by local people.

Arun Valley is the deepest valley in the world, and Barun Valley is located in the Makalu region. These valleys are home to varieties of flora and fauna. In addition, Makalu base camp and Mera Peak Base Camp are the ultimate trekking destination for trekkers looking for “off the beaten path” trekking experiences. The sacred lake for Hindus called Salpa Pokhari is a must-visit. Similarly, the lakes like Yekle Pokhari, Teen Pokhari, Barun Pokhari, Dudh Pokhari, Panch Pokhari, etc are the high altitude lakes you will come across while trekking in this protected area.

Trekking in the rugged and off the beaten trail of this protected area is an exploration in itself. Likewise, the 6000m peak such as Mera Peak and others are famous among mountaineers. They climb these 6000 m peaks before attempting to climb 8000m mountains. Wildlife activities such as Bird watching and Snow leopard tracking are also exciting things visitors can do in Makalu Barun National Park. Also do not hesitate to experience Sherpa culture and visit monasteries whenever you get an opportunity while you are there.