Before its conversion into a protected area, the place was famous as “Char Koshe Jhadi”. Used by the ruling class as a hunting ground and by locals for settlement. The name was given due to the thickness and width of the forest. The main intention behind declaring it as a national park is to represent the dense forest of the past and conserve wildlife. 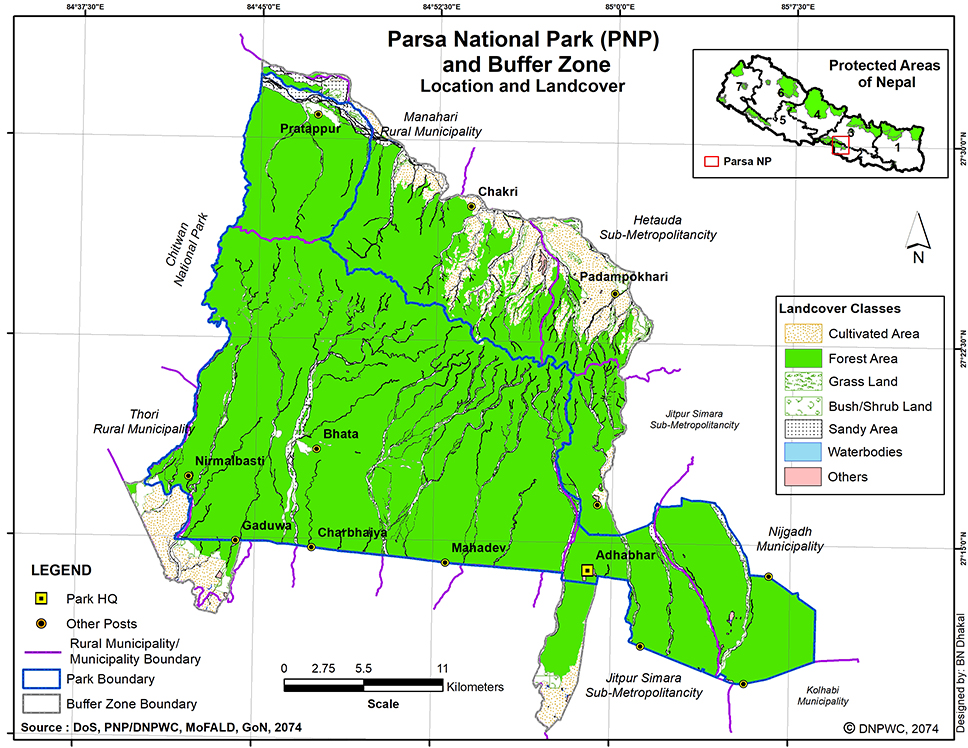 Parsa National Park is situated at the inner lowland plains of the central south part of Nepal. It is spread over Chitwan, Makwanpur, Bara and Parsa districts. It has a unique geographical setting since it is covered by the Siwalik Hills. It is connected with Chitwan National Park in the west and Valmiki Tiger Reserve on India in the southwest. The Siwalik Hills and Rapti River separate the park from human settlements. Admittedly, it is linked with the Hetauda-Birgunj highway in the east.

Parsa National Park is easily accessible by road. The Kathmandu – Hetauda – Birgunj highway passes by the entrance gate. Buses are available from Kathmandu. It takes six to seven hours to get there. Alternatively, a flight to Simara takes about 15-20 minutes, from where 15 minutes drive takes you to the park headquarter.

The park area has a subtropical monsoon climate therefore the forest is composed of tropical and subtropical forest types. Almost 90% of the forest consists of Sal trees. While Chir pine grows on the Churiya Hills, the forest of Khair and silk-cotton trees are found along the river banks. Similarly, Sabai grass, a commercially important grass species grow well in the southern face of Churiya hill.

Also, more than 500 species of resident and migratory bird species hover around the park. Some of these birds include White-breasted kingfisher, Paradise flycatcher, large racquet-tailed drongo, Golden-backed woodpecker, etc. The giant hornbill, one of the endangered birds is also seen at times. In addition, the park is well-known for various kinds of snakes like king cobra, common cobra, python, common Karit, banded Karit, etc.

The buffer zone of 285.30 sq km is extended over Bara, parsa, and Makwanpur districts. There are two 14,000 households and a population of 85,000 in two sub-metropolitan and three rural municipals.

Things to do and places to visit in Parsa National Park

There are temples paying homage to Hindu Lord Shiva and Goddess Parvati. The place is a religiously important site and a natural viewpoint due to its location on a hilltop. Moreover, the view tower neat the park headquarter is a must-visit to watch birds and animals. Jungle safari and canoe ride amid this lush green forest will bring you closer to nature and wildlife. Likewise, the elephant camp at Amlekhgunj is another place worth visiting. While the village walk and Tharu culture program are the cultural attractions of the Parsa National Park.