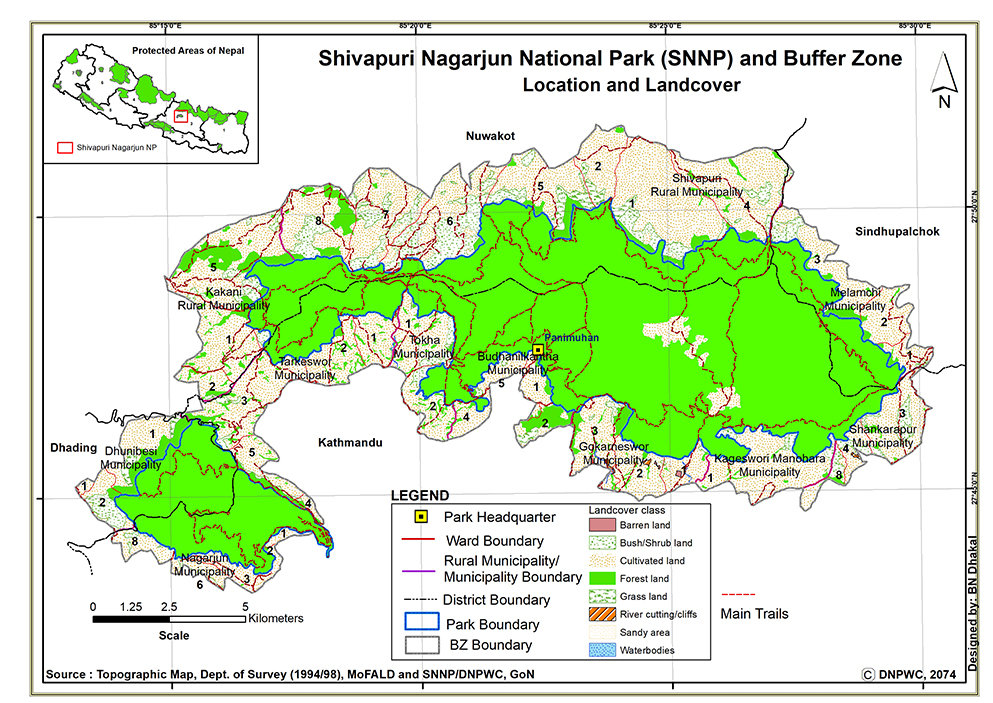 Located towards the north of the Kathmandu valley, Shivapuri-Nagarjun national park is the only national park attached to the country’s capital. This national park providing scenic beauty is spread in the areas of four districts; Kathmandu, Sindhupalchowk, Nuwakot, and Dhading.

Shivapuri- Nagarjun National Park represents the landscape of the mid-hills of Nepal. It is a transition of subtropical and temperate climate in summer; the temperature can fall up to 2 degrees Celsius and can rise up to 30 degrees Celsius in the winter season.

Spread around the area of 4 different districts, Shivapuri- Nagarjun national park can be accessed from numerous locations. Nearest to the valley, we can hike from Budhanilkantha. We can also get there from Sundarijal or via bypass, Balaju. We can easily get vehicles to reach these access points. The famous routes to get there is via Budhanilkantha, Tokha-Jhor, Balau- Nagarun and Balau- Kakani. This park can also be accessed through Chisapani, Jhule, Sundarijal, Mahankal, Panimuhan by paying fees at the entry points.

The Shivapuri Nagarjun national park is alive with numerous vegetation and wildlife. With its location, altitudinal and climatic variations, Shivapuri-Nagarjun national park is high in floral diversity. It is home to 2,122 plant species and comprises four different types of forest in this subtropical zone of Nepal. The dominant vegetation in the park includes Schim Wallichii, Castanopsis Indica, Alnus Nepalensis, Pinus Roxburghii, Quercus Semicarpifolia, Quercus lanuginose, and Rhododendron arboretum.

Also, there is faunal diversity with 24 species of mammals including 9 threatened species. We can find the threatened animals; Clouded leopard, pangolin, Assamese monkey, and leopard cat in the forests. We can also find other animals like Common Leopard, Himalayan Black bear, Goral, Jungle cat, Wild boar, Barking Deer, Sambar, and many more. 318 species of birds including the Spiney babbler and 106 species of moth and butterflies are found in the park.

Surrounded by a heavy sub-urban population, the buffer zone of the park covers an area of 118.61 sq. km. With around 14,558 households in the periphery, a population of 9,766 resides here. The people residing in the zone follow Hindu and Buddhist cultures and the visitors can experience that blend of culture upfront.

This park offers a famous hiking route along with cycling trails for foreigners and locals. If you want to encounter the beautiful species of birds with your eyes, the park also offers bird-watching experiences. You can engage in Bird watching, jungle walk, cycling, trekking, and hiking in Shivapuri- Nagarjun National Park.

Besides the scenic view, the peaceful forest environment, and the eye-catching biodiversity, the park includes some historical and religious places. Along with the Shivapuri peak which the source of the holy rivers Bagmati and Bishunumati, SNNP has various pilgrimage destinations. One can visit Bagdwar, Bishnudwar, Jamacho, Buddha Gupha, Manichur Mahadev, Kageshwori, Sundarimai, Baudeshwor, Tarkeshwor, Pachali Bhairav, and Nagi Gumba for recreation in the wilderness.