Shuklaphanta National Park was established as Wildlife Reserve in 1976 with an area of 155 sq km. In the year 1994, its area was extended to 305 sq km. Consequently, in 2004 a 243.5 sp km area was added as a buffer zone. Eventually, this wildlife reserve got its status as a National Park in 2016. The grasslands, waterholes, and wetlands formed by the floodplain of the Mahakali River are the main specialties of this National Park. This protected area is part of Terai-Duar savanna and grasslands ecoregion. Moreover, it is one of the best-conserved examples of floodplain grassland. It is also included in the Terai Arc Landscape.

The name ShuklaPhanta is derived from one of the dazzling open grassland found inside the protected area called “Phanta”. It is the largest patch of grassland in Nepal with an area of 16 sq km. Before 1976, the area was a favorite hunting spot for the royal class and was named Royal Shuklaphanta Hunting Reserve. The place is also said to be an ancient kingdom and has relics that are believed to be the fort during the Tharu King Singpal regime. 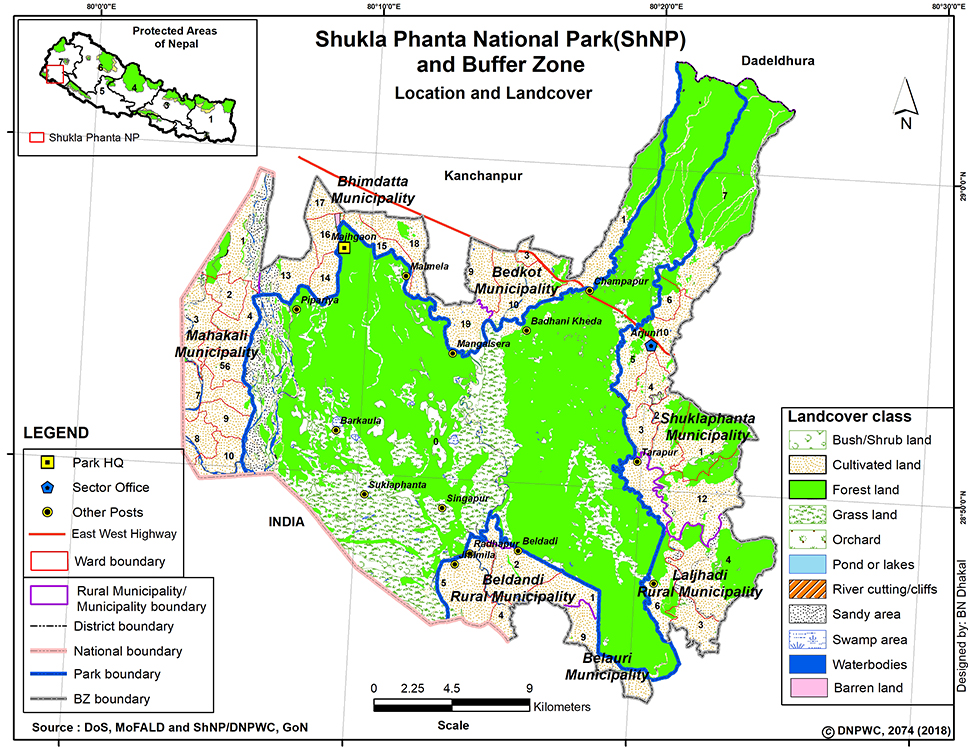 Shuklaphanta National Park is located in Kanchanpur district. It’s a southern and western boundary is connects with India. In the north, it is extended up to the east-west highway. The eastern boundary of this national park is formed by the Chaudhar River by the International boundary pillars in the forest and partly by the Mahakali River. Also, it is connected to an Indian Tiger Reserve Kisanpur Wildlife Sanctuary to the south.

The region has a subtropical monsoonal climate. Monsoon occurs from June to September. Autumn season (October – November) has pleasant daytime and cool nights with occasional rain. The temperature in winter (December – January) falls as low as 7°C. While during summer (February to May) it raises up to 45°C. The humidity starts to increases along with the pre-monsoon rains during May.

Around 52% of the protected area is covered by sal trees, 10% area is wetland while 30% area is grasslands. Likewise, 16% of the area consists of riverside forest and 2% of it is consists of a mixed forest. The forest on the riverside is cover with sal, Khair, and sissoo. Around 700 species of plants are available in Suklaphanta National Park.

The large grasslands, wetlands, and lakes of the park are home to a wide range of fishes, birds, and animals. More than 53 species of mammals including protected species such as swamp deer, Bengal Tiger, Sloth bear, elephant, Indian Leopard, Hispid Hare, Great one-horned rhinoceros, etc. This youngest national park of Nepal is also famous for swamp deer. As of 2014, the swamp deer population was 2301. Similarly, around 20-25 wild elephants and 16 Bengal tigers were recorded on the 2018 census.

Things to do in Shulkaphanta National Park